Now that we have the Album module set up with controller action methods and view scripts, it is time to look at the model section of our application. Remember that the model is the part that deals with the application’s core purpose (the so-called “business rules”) and, in our case, deals with the database. We will make use of the Zend Framework class Zend\Db\TableGateway\TableGateway which is used to find, insert, update and delete rows from a database table.

We are going to use MySQL, via PHP’s PDO driver, so create a database called zf2tutorial, and run these SQL statements to create the album table with some data in it.

(The test data chosen happens to be the Bestsellers on Amazon UK at the time of writing!)

We now have some data in a database and can write a very simple model for it.

Zend Framework does not provide a Zend\Model component because the model is your business logic and it’s up to you to decide how you want it to work. There are many components that you can use for this depending on your needs. One approach is to have model classes represent each entity in your application and then use mapper objects that load and save entities to the database. Another is to use an Object-relational mapping (ORM) technology, such as Doctrine or Propel.

For this tutorial, we are going to create a very simple model by creating an AlbumTable class that uses the Zend\Db\TableGateway\TableGateway class in which each album object is an Album object (known as an entity). This is an implementation of the Table Data Gateway design pattern to allow for interfacing with data in a database table. Be aware though that the Table Data Gateway pattern can become limiting in larger systems. There is also a temptation to put database access code into controller action methods as these are exposed by Zend\Db\TableGateway\AbstractTableGateway. Don’t do this!

Let’s start by creating a file called Album.php under module/Album/src/Album/Model:

Our Album entity object is a simple PHP class. In order to work with Zend\Db’s TableGateway class, we need to implement the exchangeArray() method. This method simply copies the data from the passed in array to our entity’s properties. We will add an input filter for use with our form later.

Next, we create our AlbumTable.php file in module/Album/src/Album/Model directory like this:

There’s a lot going on here. Firstly, we set the protected property $tableGateway to the TableGateway instance passed in the constructor. We will use this to perform operations on the database table for our albums.

We then create some helper methods that our application will use to interface with the table gateway. fetchAll() retrieves all albums rows from the database as a ResultSet, getAlbum() retrieves a single row as an Album object, saveAlbum() either creates a new row in the database or updates a row that already exists and deleteAlbum() removes the row completely. The code for each of these methods is, hopefully, self-explanatory.

In order to always use the same instance of our AlbumTable, we will use the ServiceManager to define how to create one. This is most easily done in the Module class where we create a method called getServiceConfig() which is automatically called by the ModuleManager and applied to the ServiceManager. We’ll then be able to retrieve it in our controller when we need it.

To configure the ServiceManager, we can either supply the name of the class to be instantiated or a factory (closure or callback) that instantiates the object when the ServiceManager needs it. We start by implementing getServiceConfig() to provide a factory that creates an AlbumTable. Add this method to the bottom of the Module.php file in module/Album.

Finally, we need to configure the ServiceManager so that it knows how to get a Zend\Db\Adapter\Adapter. This is done using a factory called Zend\Db\Adapter\AdapterServiceFactory which we can configure within the merged config system. Zend Framework 2’s ModuleManager merges all the configuration from each module’s module.config.php file and then merges in the files in config/autoload (*.global.php and then *.local.php files). We’ll add our database configuration information to global.php which you should commit to your version control system. You can use local.php (outside of the VCS) to store the credentials for your database if you want to. Modify config/autoload/global.php (in the Zend Skeleton root, not inside the Album module) with following code:

You should put your database credentials in config/autoload/local.php so that they are not in the git repository (as local.php is ignored):

Now that the ServiceManager can create an AlbumTable instance for us, we can add a method to the controller to retrieve it. Add getAlbumTable() to the AlbumController class:

You should also add:

to the top of the class.

We can now call getAlbumTable() from within our controller whenever we need to interact with our model.

If the service locator was configured correctly in Module.php, then we should get an instance of Album\Model\AlbumTable when calling getAlbumTable().

With Zend Framework 2, in order to set variables in the view, we return a ViewModel instance where the first parameter of the constructor is an array from the action containing data we need. These are then automatically passed to the view script. The ViewModel object also allows us to change the view script that is used, but the default is to use {controller name}/{action name}. We can now fill in the index.phtml view script:

The url() view helper is provided by Zend Framework 2 and is used to create the links we need. The first parameter to url() is the route name we wish to use for construction of the URL, and the second parameter is an array of all the variables to fit into the placeholders to use. In this case we use our ‘album’ route which is set up to accept two placeholder variables: action and id.

We iterate over the $albums that we assigned from the controller action. The Zend Framework 2 view system automatically ensures that these variables are extracted into the scope of the view script, so that we don’t have to worry about prefixing them with $this-> as we used to have to do with Zend Framework 1; however you can do so if you wish.

We then create a table to display each album’s title and artist, and provide links to allow for editing and deleting the record. A standard foreach: loop is used to iterate over the list of albums, and we use the alternate form using a colon and endforeach; as it is easier to scan than to try and match up braces. Again, the url() view helper is used to create the edit and delete links.

We always use the escapeHtml() view helper to help protect ourselves from Cross Site Scripting (XSS) vulnerabilities (see http://en.wikipedia.org/wiki/Cross-site_scripting).

If you open http://zf2-tutorial.localhost/album you should see this: 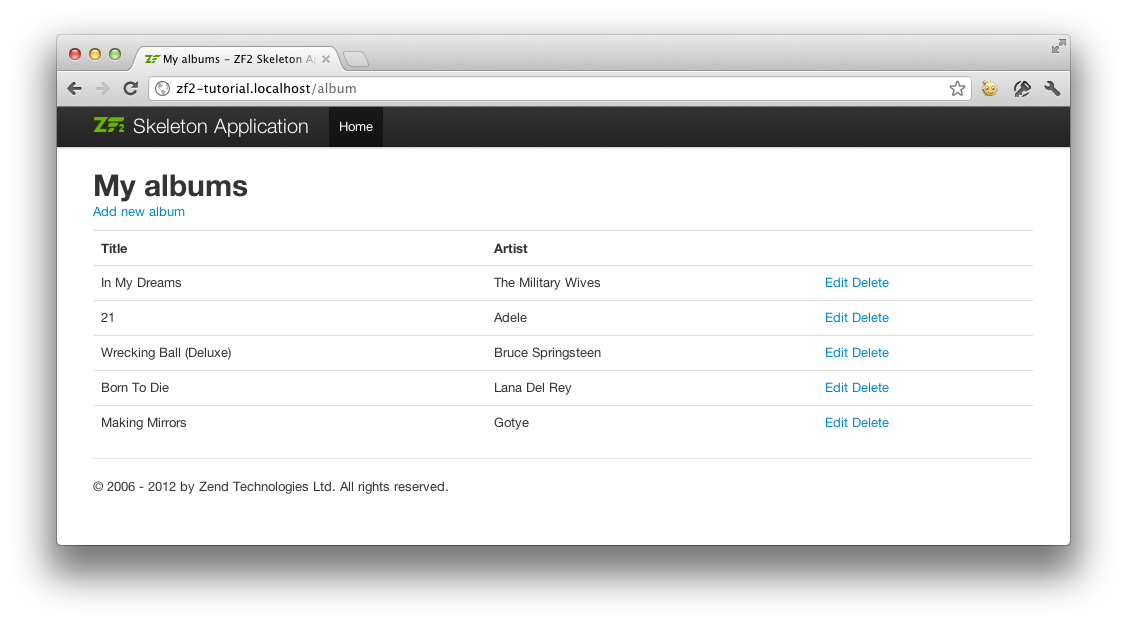